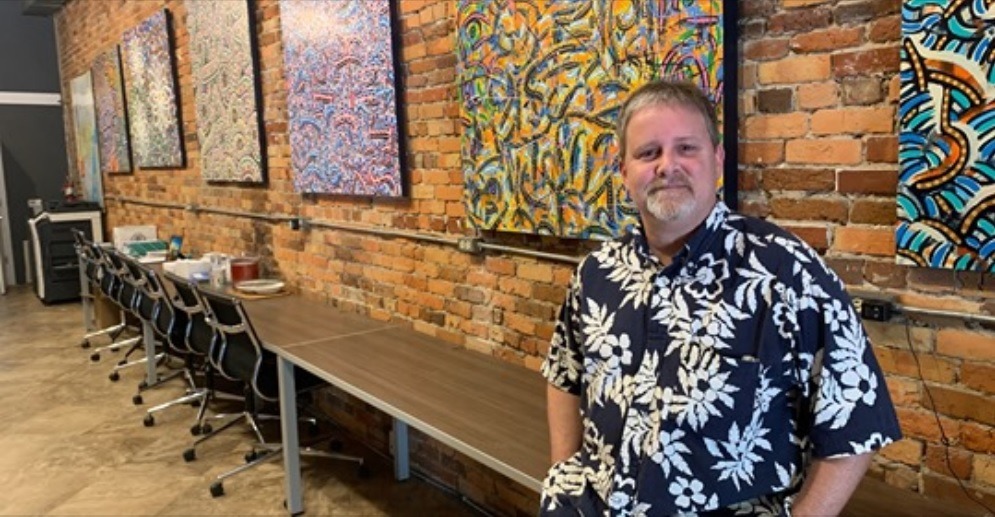 When looking through the artwork of Burritt Benson III, a.k.a. Bucky, now on display at Century 21 Sweyer and Associates at the foot of Market in downtown Wilmington, a playfulness comes to light through his large-scale kaleidoscopic paintings. There’s a language to it all its own, as various lines and circles swerve and curve and dip and loop in psychedelic overlay. It’s something Benson has been passionately working toward creating his whole life.

LOST IN LINES: Bucky Benson’s sketchbook is where his work first becomes a blueprint. Photo by Shea Carver

“I’ve always drawn,” he says as we walk through the real estate office on the night of his show’s opening last Friday. “But I really dove into this style while in college.”

Benson attended UNCW on an extended plan, if you will. “I studied a lot of stuff,” he quips. “It took me six years to get out of there.” He worked through criminal justice, then studio art and finally landed on a marketing degree upon graduation. He went to work for his father’s construction company and had access to a large 36-inch printer, and so he got into digital art, drawing in black and white and scanning in color, to create large works. In the early 2000s, he decided to take advanced digital art classes at UNC-Pembroke, near his home in Lumberton. He studied under Tarlton Blackwell, during Blackwell’s last semester, and has since remained good friends, often seeking advice and encouragement along the way of becoming a full-time artist.

“I’ve stayed in my studio and been painting ever since,” Benson says of his two-car-garage-turned workspace. Benson has shown in galleries in Charlotte, Lumberton and just wrapped a show at Sandhills Community College in Pinehurst. He also had work in CAM’s State of the Art/Art of the State twice. He has done commission work for the NC zoo and did a piece for NBC at the NASCAR studios in Charlotte. They wanted him to create an autograph wall on a quick turnaround. “I ended up being able to draw with a Sharpie, take it into computer and color it, then get a big 14-foot sign printed on aluminum in a matter of days. It was a lot of fun.”

“Untitled” is a 48-inch-by- 60-inch painting now on display at Century 21 Sweyer and Associates. Courtesy photo

Still, it’s his first solo show in ILM, and contains around 10 large paintings. One measures 19-feet-by-6-feet on styrofoam on one wall. It actually was the background wall in his studio at one time, used as a vision board where Benson would pin his paper designs as a blueprint for his acrylic paintings. “I wanted to take it down because I wanted to redo my wall and configure it a different way,” he explains, “and as I was gonna get rid of it, I said, ‘Well, I’m just gonna turn them into a painting.’”

It’s vast with imagery: landscapes hidden everywhere between cartoon-like figures and animals, from a monkey to a lion to a pirate to a soldier. A scripture is at the bottom: Matthew 5:14-16,

“You are the light of the world.” It’s the only painting in the show carrying a scripture and is part of Benson’s next project. The artist’s output is stealth, as he’s usually working on around 40 paintings simultaneously. One day he had the idea to take them to even larger platforms than his stretched canvas. He hopes to create 50 paintings for billboards across America, one in every state, all marked by an uplifting scripture.

“It’s basically my heart,” Benson says. “My hope is people will go to Google and look it up to understand what it says and maybe even read other scripture.”

A self-identified Christian, he will launch his first billboard in Charlotte, NC, and then will move on to choose a city in every state. “Eventually, I’d like to spread it across the world: art and scripture,” he tells. To get the ball rolling, monies from his ILM show—with prices starting at $2,500—will go toward its launch.

To imagine Benson’s work on an even larger scale is overwhelming. Viewers can get lost looking at his intricate traces, often finding hidden faces poking through. Some look like Australian aborigines, others pay homage to African tribal art, and others take on American folk art. In his 60-inch-by-48-inch “All That Glitters,” what looks like centipedes and roly polies (“I think they look like gummy worms,” Benson says with a light laugh) morph into a monkey or lion’s face. In fact, lions appear frequently in the hidden markings of a Benson piece.

“All That Glitters’ is a 60-inch-by-48-inch painting now on display at Century 21 Sweyer & Associates. Courtesy photo

“With all the political stuff from three years ago, I was reading Daniel 6, which focuses on the lion’s den,” he says, referencing tales that touch on jealousy and power, compromised religion and protection of religion. “After I read it, I didn’t focus on politics anymore.” He had finished some art with political undertones, but made a shift into works of fanciful freedom, letting spontaneity be his driving force.

“Often, I just approach a canvas, and follow the lines I sketch in my book,” he tells. “I don’t have a color palette in mind—just marks. Once I get the architecture right, I add in color. And I paint over a lot of stuff—which adds layers and texture. Sometimes other paintings peek through.”

Apparent influences of Picasso and Esher are rife—yet, Benson’s style is uniquely his own. His freeform is apparent, yet there is a tediousness clearly in focus for him to finish the paintings. Really, though, they’re never complete.

“I can keep going,” he says. “It’s like, ‘When do you quit?’ I look at this and think, I could have brought a face out here.” He points to one of the lines in a piece inspired by George Washington. “Sometimes it’s hard; I can go back into any of these and add something.”

And that’s the beauty of Benson’s work: Just as he could always add more, the viewer can always see more. Flipped right-side up, sideways or upside down, images appear and disappear at every eye’s turn—much like the rolling of a kaleidoscope.

Benson’s work will remain on display through June 24.